(Bloomberg) — The road to China’s autonomous-driving future is paved with solar panels, mapping sensors and electric-battery rechargers as the nation tests an “intelligent highway” that could speed the transformation of the global transportation industry.

The technologies will be embedded underneath transparent concrete used to build a 1,080-meter-long (3,540-foot-long) stretch of road in the eastern city of Jinan. About 45,000 vehicles barrel over the section every day, and the solar panels inside generate enough electricity to power highway lights and 800 homes, according to builder Qilu Transportation Development Group Co. 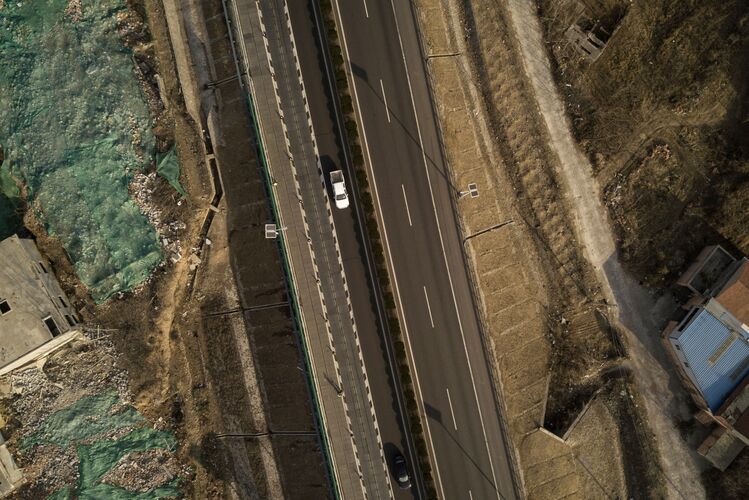 Yet Qilu Transportation wants to do more than supply juice to the grid: it wants the road to be just as smart as the vehicles of the future. The government says 10 percent of all cars should be fully self-driving by 2030, and Qilu considers that an opportunity to deliver better traffic updates, more accurate mapping and on-the-go recharging of electric-vehicle batteries—all from the ground up.

“The highways we have been using can only carry vehicles passing by, and they are like the 1.0-generation product,” said Zhou Yong, the company’s general manager. “We’re working on the 2.0 and 3.0 generations by transplanting brains and a nervous system.”

The construction comes as President Xi Jinping’s government pushes ahead with a “Made in China 2025” plan to help the nation become an advanced manufacturing power and not just a supplier of sneakers, clothes and toys for export. The 10 sectors highlighted include new-energy vehicles, information technology and robotics. 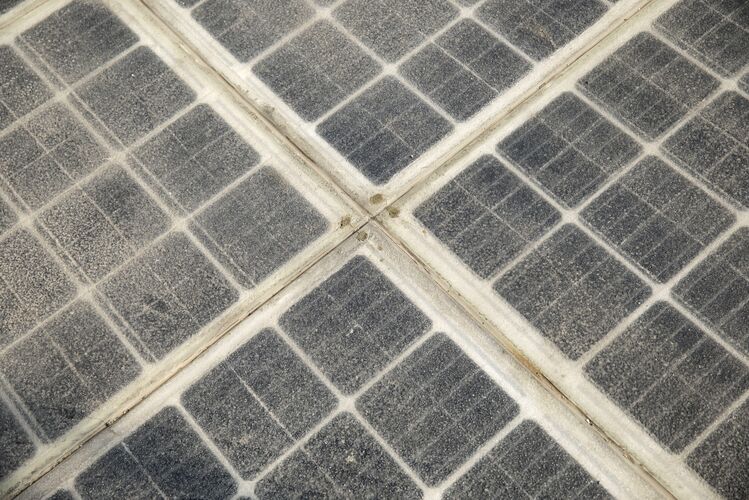 China also has a separate plan for developing its artificial-intelligence industry that calls for the nation to be the world’s primary AI innovation center by 2030.

Part of that effort involves building what the government calls an intelligent transportation system. Coordinating the development of autonomous-driving cars and intelligent-road systems is a focus, said Yuan Peng, the deputy head of the transportation ministry’s science and technology department.

“The ministry will help offer smart roads for the smart cars that are coming,” Yuan said.

Step one makes up a section of the expressway surrounding Jinan, an old industrial hub of about 7 million people that’s home to China National Heavy Duty Truck Group, which is also known as Sinotruk and includes Volkswagen AG’s MAN SE as a minority shareholder. Zhejiang Geely Holding Group also has a plant there making Geely brand cars.

The road has three vertical layers, with the shell of see-through material allowing sunlight to reach the solar cells underneath. The top layer also has space inside to thread recharging wires and sensors that monitor temperature, traffic flow and weight load.

The solar panels spread across two lanes, which feel no different to a driver than the regular road, and are thinner than a 1-yuan coin standing on its edge. The test road is too short to deliver wireless recharging at the moment, Zhou said. 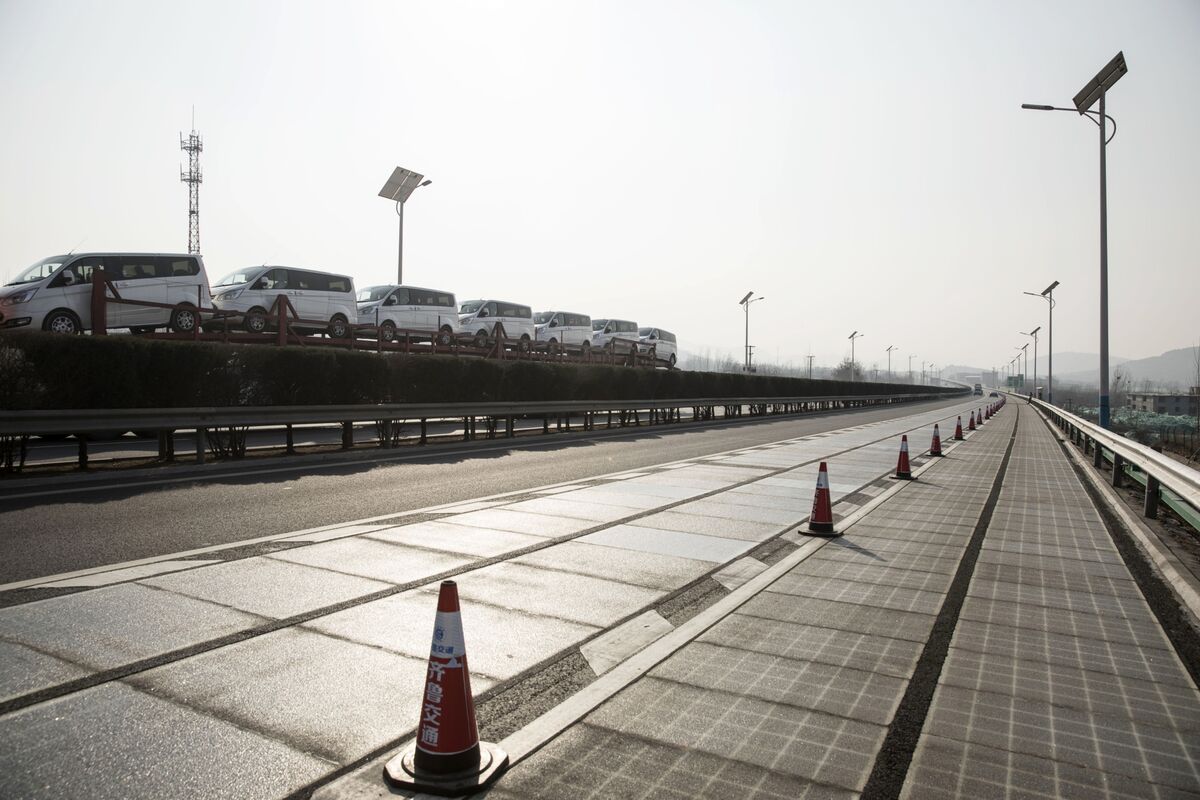 “From the angle of the technology itself, charging is not a problem,” Zhou said. “The vehicles that can be charged wirelessly aren’t used on roads yet.”

Qilu Transportation didn’t give a time frame for installing the sensors to transmit data and power to EV batteries. The road has an estimated life span of 15 years, matching that of traditional asphalt highways.

“The solar expressway does have market opportunities,” said Xu Yingbo, an analyst with Citic Securities Co. in Beijing. “The key things that need to be addressed are costs and reliability, as well as how quickly it can have the compatible system in place.”

In 2016, French construction company Bouygues SA started testing a 1-kilometer road in Normandy with solar panels layered on top. Tests of the Wattway road since have expanded to 20 locations, said Etienne Gaudin, who oversees the project at Bouygues’ Colas Group road-work division.

Wattway’s focus is generating electricity, and the company has no immediate plans to charge moving EVs, he said. Colas will start selling the project next year, prioritizing smaller locations such as charging stations and parking lots where traffic won’t block sunlight, Gaudin said.

China will have 30 million vehicles with different levels of autonomous features by 2025, said Yu Kai, founder of Horizon Robotics Inc., a Beijing-based startup developing semiconductors for those types of cars.

The initial costs are high because Qilu’s research-and-development team developed the technology and made the materials in its own laboratories, and the costs should come down as the components are mass produced, Zhou said. Qilu is owned by the government of Shandong province, which includes Jinan.

Researchers started working on the project 10 years ago. Construction took 55 days on an existing part of the highway, and the road opened to traffic in December. Solar-powered heating elements keep the section snow- and ice-free.

“In the future, when cars are running on these roads, it will be like human beings,” Zhou said. “The road will feel and think to figure out how heavy the vehicles are and what kind of data is needed.” 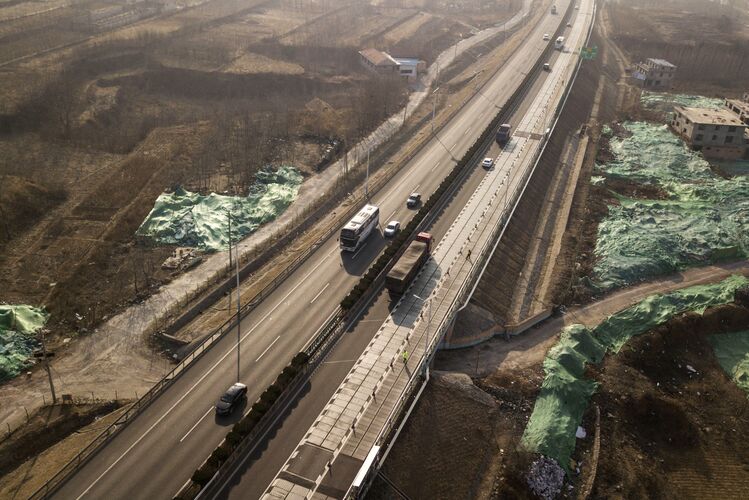 Qilu said it is cooperating with several domestic automakers on the technology but declined to elaborate.

China accounts for half of all EV sales worldwide. It surpassed the U.S. in 2015 to become the world’s biggest market for electric cars, with sales of new-energy vehicles—a category that includes battery-powered, plug-in hybrid and fuel cell cars—possibly surpassing 1 million this year, according to the China Association of Automobile Manufacturers.

The government set a sales target of 7 million NEVs by 2020.

“The future of transportation is coming to us much faster than we expected,” Zhou said. “We need to make sure that roads are evolved to match the development of autonomous-driving vehicles.”